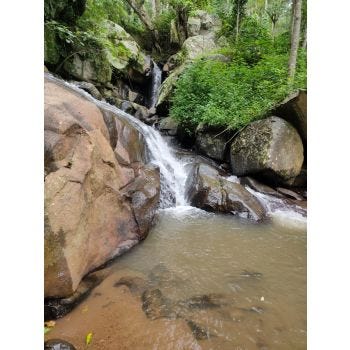 India is a country full of color: bowls of spices in brick-red and ocher shades in vivid market streets, turquoise water hitting golden beaches, and verdant volcanic mountains pervading picturesque flora. It is home to one of the most incredible biodiversity hot spots in the world.

According to the legend, at the beginning of the 17th century, the saint Baba Budan stopped by at the seaport of Mokka in Yemen during his pilgrimage to Mecca. He found a coffee tree, wrapped seven of the grains in his turban, and smuggled them to India. Once he arrived, he planted the beans in his garden near evergreen, lofty mountains in the state of Karnataka - and so the birthplace of coffee in India had arisen.

The beautiful Cascade Estate is located in one of India's traditional coffee-growing regions in the Salem district of Tamilnadu. This region is known for its high-quality Arabica coffee. The estate has a long tradition and was established over 100 years ago. The estate ensures a sustainable coffee production, maintaining rich bio-diversity and harmony between nature and humans. Various bird species and wild animals, such as bison, enjoy the estate's tree canopies, lakes, and rivers. Many varieties of native trees are grown at the farm, adding to the flora of the region. The coffee is cultivated under two-tier shade trees to provide the best conditions for the cherries to develop excellent quality and taste. The farm provided land that houses a Primary School run by the local Government.

During the harvest season, the red and ripe coffee cherries are manually selected, de-pulped, fermented, washed, and finally, the parchment is dried in the sun.