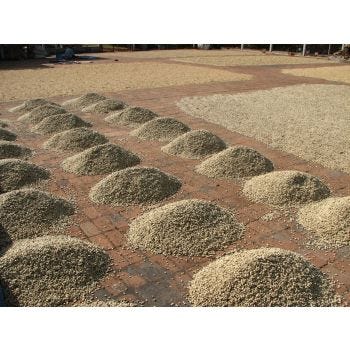 According to the legend, the saint Baba Budan stopped by at the seaport of Mokka in Yemen during his pilgrimage to Mecca in the early 17th century. He found a coffee tree, wrapped seven of the grains in his turban, and smuggled them to India. Once he arrived, he planted the beans in his garden near the evergreen mountains - and so the birthplace of coffee in India had arisen.

Idinjamala is a village in the Idukki District. It is part of the Western Ghats of the southern peninsula in India. Most people in this area make a living from farming.
The Marnacadu Social Service Society has established a wet mill in Idinjamala to support high-quality organic coffee production in the region. The Cooperative currently counts around 1200 farmers and particularly supports female workers.