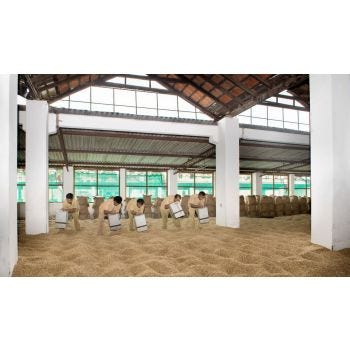 Monsooned coffee is absolutely unique to India and a one-of-a-kind rarity. Back in the days, coffee was shipped from India to Europe in wooden freight sailboats and stowed below deck in a humid, hot, and leaky environment. During the shipping season, the monsoon winds swept across the south-western Indian sub-continent, bringing heavy rain to the sea route. The coffee‘s exposure to these humid and warm winds constitutes what we know today as the monsooning process. It describes a striking transformation of the coffee‘s characteristics: When arriving in Europe after several months of sea voyage, size, texture, color, and cup have changed significantly. The beans transitioned from green to pale gold and were found swollen in size due to the absorption of humidity.

Today, monsooning is a purposive, controlled, and labor-intensive process. To recreate the effect of the voyage, sun-dried cherry coffees are spread out in ventilated warehouses at the Malabar Coast in the Indian southwest. Being hit by moisture-laden monsoon winds from June to September, this region proved to be particularly suited. During the monsoon months, the sidewalls of the warehouses are opened to let the winds circulate around the coffee. As a result of the moisture absorption, the beans swell to double their size, lose density, and take on a unique taste. For 12 to 16 weeks, the beans are raked and turned by hand several times a day for uniform exposure. Finally, the coffee undergoes a careful process of polishing, grading, and color sorting to make it homogenous, shiny, and thus ready for export. Monsooned Malabar AAA is the product of high-quality Arabica cherry AAA grade beans subjected to the process of monsooning. Due to the very lightweight of the beans we recommend roasting this coffee by volume and not by weight.