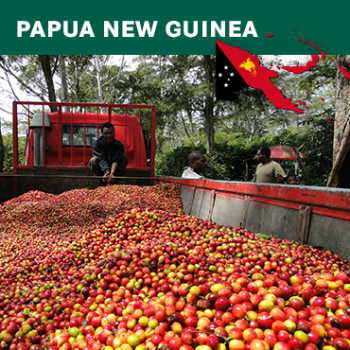 What comes to your mind when thinking about Papua New Guinea? Most likely not a whole lot as this remote country remains one of the least discovered ones. Located north of the Australian tip, marking the eastern border to the Pacific Ocean, this country stuns with its cultural diversity. More than 850 languages managed to establish themselves in this country. Not surprisingly, PNG is also one of the most rural countries in the world. Scientists also believe that PNG may still hold numerous undiscovered plants, animals, and indigenous peoples in its lush jungles. Reasons enough to pay more attention to coffees from this stunning and untamed land.

Coffee is a relative newcomer to Papua New Guinea considering that the commercial coffee production in the country dates back to 1926/1927 when the first Jamaica Blue Mountain seeds were planted. Making up a share of approx. 70% of the coffee production is largely characterized by small farmers with landholdings that grow as little as 20 trees per plot in so-called "coffee gardens" alongside subsistence crops. The country is generally dominated by fragmented mountain ranges, steep valleys, and plateaus that are difficult to access.

Since many of the smallholder farmers live in such remote places, their coffee must be picked up by airplanes on grass landing strips, or for those lucky enough to have road access, trucked to the nearest town – often struggling with broken axles from the trip. The typical village-based grower in PNG uses no synthetic fertilizer or chemical pesticides. Leaf-fall from the trees which shade it, together with the skin and pulp of his freshly processed crop provide natural and nutrient-rich mulch.

In order to process his coffee, the farmer uses either his own small hand-operated pulping machine or brings his coffee cherries to central washing stations. Nevertheless, also larger farms such as the Sigri and neighboring Kigabah Plantation are part of the exciting coffee culture in PNG. In general, PNG coffees stand for exciting complexity, truly spinning you once around the flavor wheel.