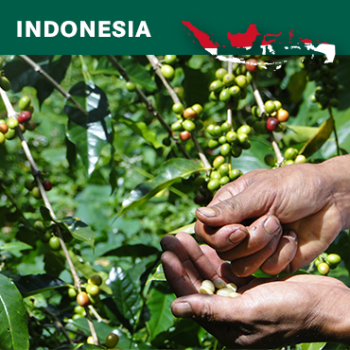 Zum Anfang der Bildgalerie springen
Produktinformationen
Details & Stories
will not be shown online/infosheetJAVA BLUE SUNDA ARABICA COFFEE.The coffee is coming from a village named Loa, Bandung- West Java. With elevation range 1,100 m- 1,300m above sea level, the village has approximately 500 farmers with total coffee farm areas 300 ha. The total production of this area is just about 100 to 150 MT/year. The low production caused by no usage of any synthetic fertilizer.The dominant varietal in the village is linie S, but the farmers also plant some other varieties like Andung Sari, Kartika (varieties promoted by Indonesia Coffee and Cocoa Researcher). They are not using any chemical fertilizer on their coffee farms and all of them manage their farms organically. They even use the composted skin of the cherries as their fertilizer.//-->
Generelle Informationen zum Land