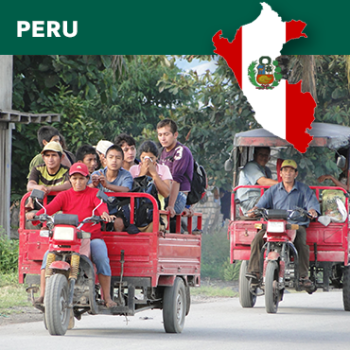 The town Rodriguez de Mendoza is found on the eastern slopes of the Andes. The community of the Asociación de Productores y Exportadores de Café Rodriguez de Mendoza (APROEXPORT) stretches all the way to the southern border of the Alto Mayo Protection Forest. The 356 cooperative members run smallholder farms between 2 and 10 hectares size.

Ever since its foundation in 2013, the cooperative has strived to improve the livelihoods of its members. On a professional basis, experts are invited to consult on organic farm management practices. The cooperative profoundly believes that only intact environmental conditions will continuously lead to higher yields and consistently high quality in the cup. The area is known for its many forests and streams, which the farmers aim to maintain and thoroughly improve. The cooperative and their farmer members aim to benefit from the premiums for the organically produced coffee. This will supports the coffee farmers but also helps to establish solid and independent structures in a relatively remote region.

We have been sourcing this coffee for a couple of years now and are truly happy with the consistency. We can only invite you to try this coffee yourself!

When we think about Peru, we think about diversity. Located in western South America, Peru hosts a range of different climates, landscapes, ways of life, and economic activities brought about by its extreme elevation and southwest winds flowing across its territory and along its Pacific shoreline. Similarly, coffees found in Peru vary significantly from one another. There are 10 main producing regions, seven of which represent 91% of the producers and cultivable areas. Cajamarca, Junin, Cusco, and San Martín are the most well-known.

Coffee was first introduced to Peru in the late 1700s. By then, most coffees were consumed locally until the first exports began in the late 1800s. In the following century, Peru defaulted on a loan from the British government and ended up giving them two million hectares of land as repayment. One-quarter of those lands was used to grow crops, including that of coffee. When the British left, their land was re-purchased by the Peruvian government and then distributed among local farmers. However, due to a series of military dictatorships along with political and economic crises, the Peruvian coffee sector has faced harsh times.

In spite of all this, coffee today is also one of the country's main agricultural export products. Some 223,000 families, mostly small producers, manage 425,400 hectares of coffee. What’s more, a third of all agricultural employment in Peru is connected to coffee. With diverse climate conditions across the country, Peru is home to many different coffee varieties. Some of them are Bourbon, Typica, Caturra, Pache, Mondo Novo, Catuai, and Catimor.

There is also a strong culture of organic production in the country. Currently, Peru is the world’s leading producer of organic coffees, having its main markets in the United States, Germany, and Belgium.