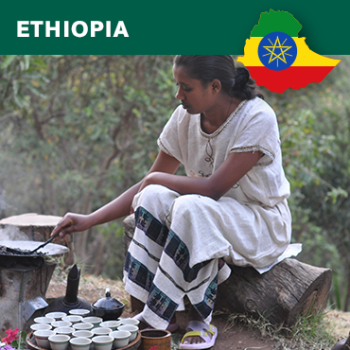 This coffee comes from the washing station Gelana Abaya in the Yirgacheffee Highlands, which produces approx. 20% natural and 80% washed coffees. The smallholder farmers from the surrounding area bring their crop to the Gelana Abaya washing station where the cherries are sorted and naturally processed. After picking only the ripest cherries, they are dried for approx. 15-20 days in the sun on so-called „African drying beds“. During the daytime, the cherries are constantly turned to assure an even drying process. Throughout the drying process, the fruit sugars of the pulp are partly soaked up by the bean, resulting in the typical fruity and sweet flavor of this coffee. Once the coffee cherries have reached a humidity content of approx. 13% of the husk is removed and the coffee is prepared for shipping.